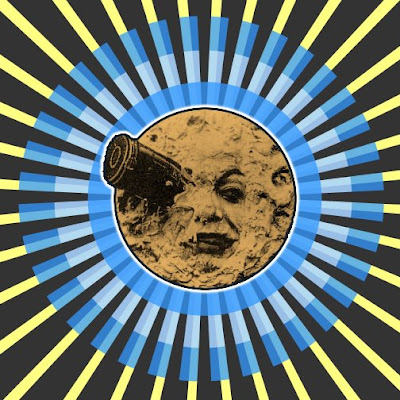 Greetings & Hail Voyagers!
As promised to Joe Ross, of the Green Pajamas, back on June 5th, we’re prepared to answer his (fantastic) “Turn The Table” question, to wit:

Joe: Hmmm. Do you consider parodies of psych pop to be legit? Such as, Spinal Tap's "Listen To The Flower People" or the above mentioned Dukes Of Stratosphere? Even "Satanic Majesty's Request" was kind of tongue in cheek in its day but it’s still one of my faves.

Before we begin I think it sufficiently important to stabilize our footing as regards our subject by grounding all concerned with a few definitions:

1. Caricature - 1 : exaggeration by means of often ludicrous distortion of parts or characteristics 2 : a representation especially in literature or art that has the qualities of caricature 3 : a distortion so gross as to seem like caricature
(synonyms caricature, burlesque, parody, travesty mean a comic or grotesque imitation. caricature implies ludicrous exaggeration of the characteristic features of a subject (caricatures of politicians in cartoons). burlesque implies mockery especially through giving a serious or lofty subject a frivolous treatment (a nightclub burlesque of a trial in court). parody applies especially to treatment of a trivial or ludicrous subject in the exactly imitated style of a well-known author or work (a witty parody of a popular novel). travesty implies that the subject remains unchanged but that the style is extravagant or absurd (this production is a travesty of the opera). )

2. Homage 2 a: expression of high regard : respect —often used with pay b: something that shows respect or attests to the worth or influence of another : tribute
Posted by -valis at 11:58 AM

A sampler Mix of all of the artists mentioned in this effort has been put together, with front & back cover art, and is available here:

Oddly, I was told that I had the "wrong access code" to download this file on Rapidshare....go figure.

The Nick Haeffner/Damien Youth interviews were just outright KILLER!! Geez, what next? Will you be sitting down for sweet chili-hash oil-ice cream sodas with a couple of archangels, penciling your notes on the flip sides of the ten commandments?

When you or I toss a pebble into a pond, it causes a slight disturbance on the surface of the water. Those cats threw their pebbles into the pond and caused invisible, underground tidal waves!!! I get the sense, from reading their replies, that they have NO idea of the impact they've had.

You are a true psych historian. Awesome interview! I'm DLing the mix as I type.

This site gets more interesting every week.

Mr Valis' obvious love for the music which stimulates us all so well is evident in every word he writes.

His captures become more audacious as the weeks pass! I am waiting for him to resurrect Syd and get him interviewed too!

Keep it up my fine friend!

Brilliantly conceived as ever, Valis. Yer a credit to Psychedelia. Now, where are those sugar cubes...

Your perspective from atop Hilly Fields remains, as ever, startling in its clarity. Bravo!

Can I share a cup of 'tea' with you mon ami? Fabulous, just fabulous interview, as ever my ghast has been flabbered by the depth of your psych knowledge.

Aagh!!!! Cannae get past the freakin' cats when trying to d/l, still nae mind. The post was worth it for the interview alone.

I'm really blown away by this. I'll be delving into what you've written and assembled here for some time to come. I haven't listened to all of it yet, but it's apparent that these tracks work on different levels. First, they're great psych, and second, they're sincere homages, making it fun to play the spot-the-influence game. It's clear you put a lot of thought into this compilation.

Thanks for this Valis. Thoroughly enjoyed the tunes and the extensive liner notes that came with it.
Now, tomorrow I'll be driving to the Lake District in England for Summer Solstice. Any ideas what I can listen to on the drive there?

Is it Christmas!? It must be. Cause the gifts keep on comin' around here.

Oh, what a beautiful day it is at the Gnome Garden. A tingle with anticipation.

And, MUCH thanks,
Gnome